Before dropping with an illness that can only be described as The Plague I spent a weekend in Texas with Continental Tires. A group of us flew into San Antonio, had a lovely dinner on the Riverwalk and then woke up a few minutes before God on Saturday morning to make the trek out to Uvalde where Continental Tires has their proving grounds.

Before tossing out a phrase like “proving ground” let me take a moment to define a proving ground. In this instance it includes (but is not limited to) a main building with locker rooms, offices, kitchens and a classroom that I’d estimate can comfortably seat 70 or so people, 5,000 acres of tracks. The tracks are wet, dry, paved, unpaved, gnarly and offroad, there’s a small circle and long straightaways. Anything you want to do to abuse a tire can be accomplished at the proving grounds. We were able to do some damage, but in a day you are limited to only a portion of the experience.

We, as a group, were there to experience the Continental TrueContact tire. It’s an all season tire with advanced wet braking grip. We were about to find out about that grip. 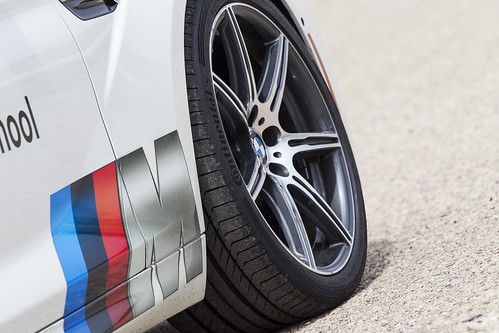 Our morning started in the classroom. We found out what we’d be doing and got a rundown on the facility. I’m a terrible listener and my driving partner and I missed the part where we found out we’d be driving all the cars so we just made a run for it and tried to monopolize one of the two Mustangs. The Mustang was the most aggressive car on the track available for us to drive and Nichole and I were not feeling like sharing so we started the day by racing to nowhere.

The point is that Nichole and I found each other and it’s a good thing too because we knew that this was only going to be fun if we could drive it like we stole it. And we did.

The first exercise of the morning had us driving on a wet track, reaching 50-55 MPH and then braking and measuring the distance required to bring the car to a halt. This was actually a lot of fun and Nichole and I spent a good bit of time laughing and driving. 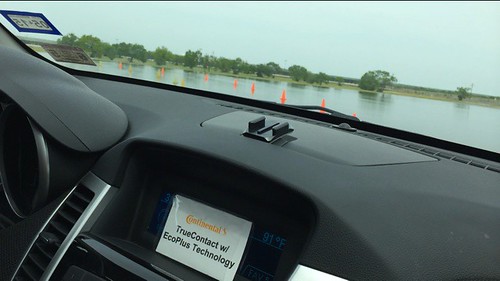 The Continental TrueContact tires outperformed the competition with wet braking reducing braking distance by as much as 26.2 feet in just fractions of a second.

To illustrate our results were as follows:

After wet braking we did a 200 meter drive on a round track where a portion of it was wet. The vehicle all but immediately spun out of control and once again Nichole and I laughed like crazy people. Some of these tires were shaved to minimal tread (4/32 inch) and the difference in handling would easily have been the difference between being in an accident and avoiding one.

The wet autocross was so much fun it should have been illegal. Basically we maneuvered through cones and a slalom or two using different tires. This is where the Continental TrueContact tires made a difference. We were able to maintain significantly more control of the vehicle using Continental Tires than with the competition. 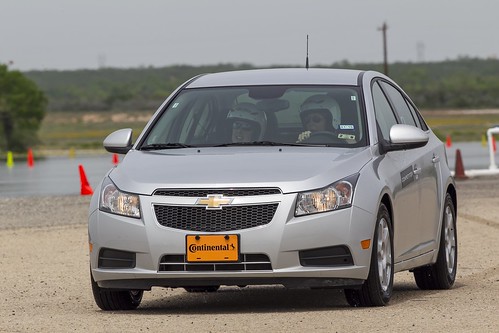 The final parts of the day were sheer joy. An instructor from the BMW Driving school took each of us out in the M6 and drifted at about 130 miles an hour. It’s exactly the sort of driving you hope to never do outside of a track and then we were each taken off road in buggies. It was filthy and fun and fast and off roading is on the short list of experiences I’d like to have from the driver’s seat.

The day was capped off with a visit to a local ranch. There was skeet shooting, fishing, great steaks and margaritas. A real Texas experience. Each of us were given a certificate for $1,000 worth of Continental Tires to be used within the next 12 months. I’m not quite sure if I’ll use mine. Just a few months ago I put four new tires on the Jaguar. They’re General Tires, part of the same company as Continental. I guess timing is everything. 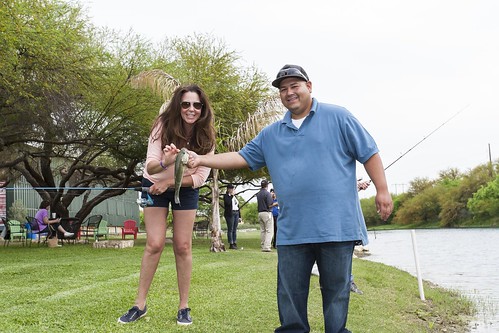