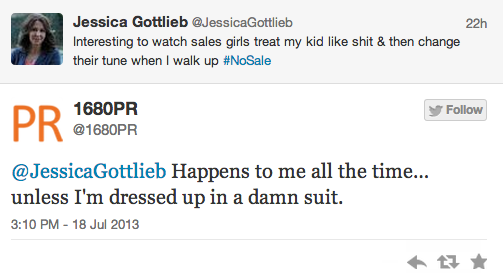 @JessicaGottlieb Happens to me all the time…unless I'm dressed up in a damn suit.

I was with a girlfriend earlier today and we talked about Trayvon Martin and what it means to be a young black man in America. Typically I’d refer to him as African American but my friend uses the term black and I’ll appropriate it here. My friend describes herself as multiracial, she’s used the term half black in other conversations. I’m sure, though, that people describing her would describe her as a black lady because when one of your multiple races is black that’s what people can see. This is one of the only times in our friendship that her blackness or multiethnicity has come up in conversation.

We talked about the sadness of the Zimmerman verdict and the horror of a child growing up next door to my own and being treated so differently by the community. We talked about people just not getting it and white ladies changing their avatars to hoodies but not having a single friend of any race other than their own in all of their facebook friends (and presumably in their lives). We touched upon this breathtaking essay by Amir Questlove Thompson in the NY Times where he recounts one of the many times a lady has been afraid of him and he attributes that to his blackness. More on this fear later.

A smart and self aware woman would take this opportunity to delete this post but I think we’re at a point where I need to just swan dive off this cliff and know that a body of water will appear. I’ve used black, African American, multiethnic, and white in two short paragraphs. I do not know what the right term is. I don’t know what won’t offend people and I’m seldom sure that what I’m doing is right. I can’t guarantee that no one will be upset but I know that people like me, people who appear to not be a minority, need to talk about race before more horrible things happen.

When I’m with African American friends who call themselves black I sometimes ask them if I should say black or AA. They all give me different answers, they’re all different people.

In polite society we don’t talk about people’s color. When my kids were in kindergarten I’d ask them about their day and they’d talk about a classmate. I’d ask which kid that was and they’d describe them starting with white, Asian, African American, Hispanic and then move on to hair color and other traits. By the end of elementary school they’d start with hair color and then something about who they were and finally land at race, which is arguably one of the first things we notice about one another. My son is the red head, your son is Japanese, these are things that make them easily identifiable. After establishing these things we can talk about how they both have brown eyes and impossibly long legs.

In our rush to prove ourselves as being color blind are we creating other, larger problems?

Part of me wants to console Questlove and let him know that the lady in the elevator who was afraid of him in his swank apartment building might not have only been afraid of his color. She might have just been afraid of his size (though that’s probably wrong). We all have issues. Recently I was walking in my neighborhood with ear buds in and realized that someone was walking behind me. I turned over my shoulder, got a look at him and smiled, turned forward again and started walking some more. After two turns he was still behind me and I turned once again to look at him (I wasn’t afraid, it was midday and I live in a sleepy suburb, he was a middle aged man wearing loafers and carrying a bag of Indian food) and he freaked out. He apologized, explained he wasn’t following me and then started to walk on the other side of the street.

Some things are just complicated because we are men and women. Adding race to gender issues is terrifying for everyone.

Recently a young African American man named Brian Banks was released from prison after having been falsely convicted of  raping a white girl while they were in high school. Bank’s story is no less important than Trayvon Martin’s. You can’t make it right for Banks, we are incapable of giving him back ten years of living. Would a white teenager have been convicted? Would a white teenager have been accused? Banks’ story has a happier ending than most but it needs to be told and retold.

We have a president who is making us look at race, even when we don’t want to look.

It’s not enough to have an African American Community talking about race. We all have to talk about it and stop whispering. Try having uncomfortable conversations with your friends of other races and if you don’t have any friends whose skin or hair looks very different than your own ask yourself why that happened. How did that come to be?

No one needs answers today or tomorrow but what we do need today and tomorrow is dialogue. When we all pretend that there isn’t a problem and we’re all “ooh I love everyone I’m so liberal and post racial” then we never make changes.

Today’s challenge is to talk about the different Americas we live in. Even when we are neighbors.