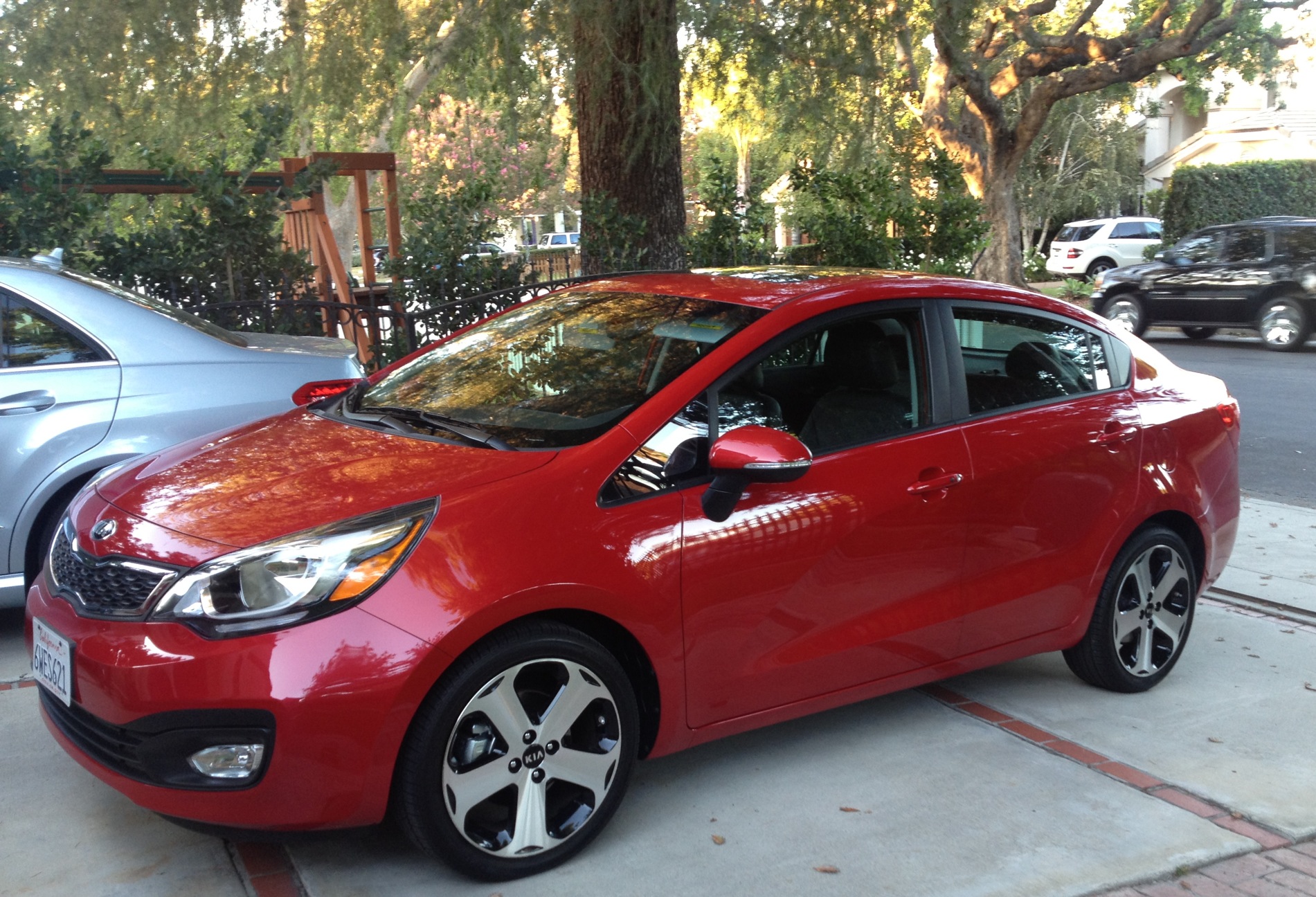 A few weeks ago I was in the 2013 Kia Rio. It’s adorable and small and not very fast but it’s incredibly comfortable and stickers around $17,000 (I drove a well equipped Rio that was $21,340). You understand that we’re not dealing in a luxury vehicle here but a perfectly good car.

This is how I spent Friday in the Rio.

Left the house at 12:45 to get Jane to her massage at 1. While she was getting massaged I brought Alexander to Target to pick up a gift card and some nuts. We’re sort of addicted to the cashew mix from Archer Farms.

So we’ve got 20 minutes of car time and 40 minutes to shop at target. We grab eighty dollars worth of nuts and I pray that I have secured a Target-free life until November.

It’s back in the car and we have to get Jane from her massage. We rush through a bank and then head to volleyball practice. Practice begins at 3 in Calabasas.

We arrive at 2.57 at which point Jane informs me that she’s supposed to be there 15 minutes early to help set up. I’d been congratulating myself all week for getting my kids everywhere on time. Apparently Monday through Thursday were a bust.

What? You don’t hear Queen singing We Are the Champions when you get your kids where they need to go on time? Embrace the minor victories ladies. Moms don’t really get that many of them.

I drive Jane through, slow the car down, she jumps out and we head back on the 101 to get Alexander to the birthday party in Studio City that begins at 4pm. It’s a surprise party, we cannot be the assholes who are late. We have to be a different kind of asshole today.

We arrive early to the party. We are there at 3.50 and are the first by about 10 minutes. This is unfamiliar and Alexander and I both sort of look at each other like Oh, this is how it feels?

When the other kids got there at 4pm I left to trek back to Jane and her volleyball practice. It was another 50 minutes for 17 miles and practice ran overtime so I got to watch Jane defy gravity for a bit which always delights me. We headed back to Studio City for Alexander which took over an hour and then grabbed dinner on the way home.

At this point you’re probably like, “So what about the Rio?”

Well, it was comfortable. It cooled down reasonably on 105° days. It’s not a fast car but it’s not slow either. The seats were comfortable enough even though they were manual and the rear seats were fine for the kids (everyone is over 5 feet at this point) but one of the seat belts broke on us so we had one kid sitting in the middle and another behind me. It wasn’t ideal but you know… lemonade and all.

I think that what’s so interesting about the Rio is that it’s completely unremarkable and utilitarian. The most attractive thing about the Rio I drove is it’s color. If I’m being completely fair it is an outstanding shade of red and I wish more carmakers would embrace rich colors like this.

Everything else is bland without being blah (how’s that for articulate?). Please understand that I mean this in a flattering manner. Let’s face it, people eat a lot of vanilla ice cream. The 2013 Kia Rio is the vanilla ice cream of the compact cars. It’s reliable (okay maybe just not the seatbelt but I’m not convinced that one of the 90 kids who was in that vehicle didn’t twist/trap/pull/push it in an improper manner) and it’s got enough power to get you on the highway and keep you in the fast lane but the automatic transmission just isn’t as fun a the manual transmission on a much less expensive and poorly equipped Mazda.

I went through two tanks of gas with the Rio in a week. It was a week of heavy driving and I enjoyed every bit of it. I had the Mercedes sitting next to it just gathering dust for a week and never felt deprived of much. Like other Kias the navigation is a joy. Take a look at the window sticker and note that this nicely equipped vehicle costs less than a luxury cruise for a family of four. Actually I feel compelled to add that this $21,000 Kia has a tech package that’s more impressive than the Benz that’s all dusty next to it. Now that we’re looking at having a teen driver in the house the only things that give me pause are the four star safety ratings. Historically I’ve been 100% on board with vehicles that have four and five star safety ratings but imagining my daughter behind the wheel has me wishing for five stars all the way through. The rear seat side scored five stars and every other measurement was four stars. The reality is that this is a safe little car, the mom in me would like her to drive a tank (not literally – even though I have).

Putting two car seats in the Rio would be no problem though I doubt you’d fit in a third. To be fair I doubt any car in this class would support three car seats.

I love the Rio for it’s unfussiness. It’s a car. It’s a compact car that handles very nicely, features a good number of amenities, keeps you safe and doesn’t break the bank. It’s the vanilla ice cream of cars and I say that with unending love for tradition.