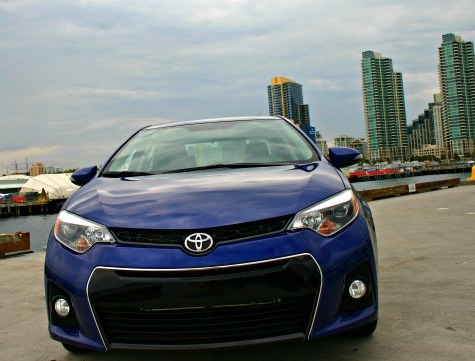 I had the opportunity recently to go to San Diego and drive the 2014 Toyota Corolla. I’ve never owned or driven a Toyota but have always heard great things about them, so I was pretty excited to get behind the wheel to find out for myself how well the 2014 Corolla handled on the open road.

The Corolla is affordable yet sexy, which are not two things you usually see written in the same sentence because typically sexy is expensive. The Corolla is both sleek and powerful. The new trapezoid grille with piano black finish and rear spoiler on the exterior gave the 2014 Corolla a street racer feel, which made this mom of 2 feel a little bad ass.

I drove the Corolla S series, which has a beautiful interior that is built for convenience including SofTex heated front seats, 8-way power adjustable driver seat and 41.4 inches of rear legroom. I usually say size doesn’t matter, but when you are talking about legroom in the back seat, inches definitely count; bigger is always better especially when you have kids.

The interior was gorgeous but the technology of the entune audio and navigation system inside the dash surpassed my expectations. Entune is a Premium Audio with Navigation and App Suite that includes navigation with 6.1-inch, high-resolution split-screen, 6 speakers, hands-free capability and many other impressive features.

I was a little apprehensive about driving for the first time in California, especially since some of that driving would be on the freeway. I wasn’t sure the Corolla would move with the speed and fluidity that I’m looking for when driving in high traffic but it exceeded my expectations.

To my surprise, the 2014 Corolla is engineered to be driven fast with a sport drive mode which maximizes torque output. It features paddle shifters on the steering wheel to enhance the feeling of control. It handled the sandy, beachfront curves of I-75 smoothly and with neither hesitation nor reluctance. This Chicago driver felt completely confident maneuvering in and out of traffic.

The 2014 Corolla truly is like a beautiful woman; sexy as hell and dependable. I found myself constantly being pleasantly surprised. My favorite thing about the car was how it handled on the road but I also enjoyed that is has plenty of room for my girls in the back. I could be mom sexy in the 2014 Corolla but at the same time be mom responsible. Speaking of safety, the new Toyota Corolla has a new side impact rear support beam located in the seat cushion and 8 airbags! It’s the best of both worlds.