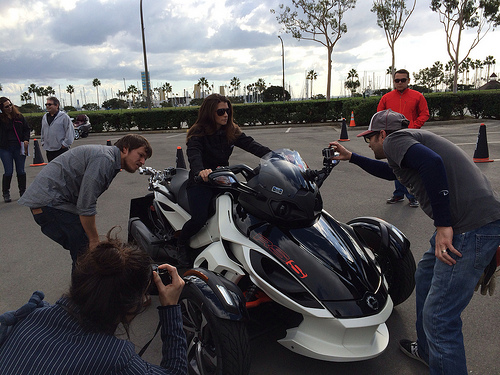 Last week I was invited to drive the 2014 Can-Am Spyder for the first time. You may have seen these things around town; they look sort of like a reverse tricycle with two wheels in the front. I guess technically it’s a three wheeled motorcycle that isn’t actually a motorcycle because you don’t need a special license to drive one. Scratch that, you sort of need a motorcycle license to drive one and there’s a funny story I’ll tell you in just a bit.

Since the motorcycle show was coming to Long Beach I was invited to drive the Can-Am. I didn’t really have the time so I declined. Then my phone rang and someone asked me if I wanted to ride the Can-Am with Danica Patrick and I found that Long Beach was, in fact, not too far and that I would love to go. What can I say? I’m a sucker for a trailblazer. Even more than wanting to go I wanted to bring my brother with me so he took time off of work and we headed down to the Long Beach Convention Center to see this new not quite a motorcycle vehicle (I honestly don’t even know what to call it) and Danica Patrick.

We got an introduction to the Can-Am Spyder and it’s really quite simple. I was able to drive it easily though drive might be a generous word. I never actually left first year but it was thrilling and scary and safe feeling all at once which left me really just wanting to drive it more.

Danica did a few laps around the parking area and it was fascinating to watch her drive. She doesn’t do things the way normal people do. A friend of mine said that she was one of the most intense people he’d ever seen and I think that he understated the facts. Danica had her eyes on the road and it was as though we all disappeared once the engine turned on. She quickly maneuvered the Can-Am around the area and made it look like an extension of her body. When I drove it didn’t look quite like that.

My brother was a little speedier than I was at a little more comfortable. We both noticed (and liked) that there’s quite a bit of storage and heated and hand grips for your passenger.

I don’t know if the Can-Am is a really expensive toy or an incredibly affordable commuting solution. I do know that they treated us to an absolutely lovely morning as I got to ask Danica Patrick what it’s like to be in a field where she has no female colleagues. She just didn’t care, she only wanted to know if people could talk racing. If they could talk about racing great if they wanted to talk about mani-pedis she was okay with that too. I really enjoyed her candor.

Honestly I’m not sure how to cover this one I certainly feel like motorcycle riding is a danger that I’m not excited to have in my family. In fact after one of the moms died on a motorcycle in 2nd grade I made both my children promise to never be on a motorcycle. The other part of me thinks that the only live once and it was an awful lot of fun being on the Can-Am… which is technically not a motorcycle.