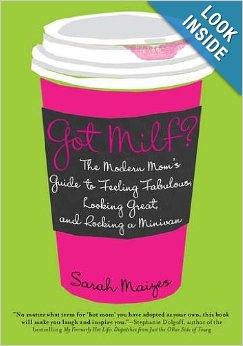 When Mr. G travels I look homeless. Not like 90’s grunge homeless but like a woman who was just kicked out of her suburban neighborhood. Unkempt hair, no makeup, there’s the very real possibility that I’ve skipped a bra in favor of his really baggy shirts and sweatshirts piled on one after the other and you can be sure that I’m wearing man repelling cotton underwear that approach the size of Nebraska.

Unless I’m going to Sarah’s house. You see somewhere around a third of the way through Got MILF? Sarah not only tells us that MILFs never have panty lines she even recommends several brands of undergarments that can get the job done. So when Tuesday rolled around and I had to pull on a dress to go to Sarah’s house because none of my pants would button after the food fest we had in New York the first thing I did was check for panty lines. The second thing I did was change undies. Gah, even in a dress those lines show through.

Sarah and I are working on something together and I’m not sure how much I can say just yet but all I know is that I spend a ridiculous amount of time laughing. Like real actual belly laughs and I find it distressing that the lady who makes me laugh also brings me underwear shame.

Pro tip: Try Commandos. Yes, in the past I’ve recommended Hanky Panky but now that I’ve tried commandos I’m pretty sure I’ll never need to own anything else.