Much has been written about New Orleans. It’s a culturally rich city that birthed Jazz, Dixie and American’s first pharmacists. The air in New Orleans is sweet with humidity and blossoms, spices and music. New Orleans is more than a city, it’s a culture and a way of life. But is NOLA a good place for women who travel solo?

In addition to being a cultural hub and a fabulous vacation destination New Orleans has a booming film industry (I’m not supposed to endorse that because of runaway production) and if you’re interested in learning more about that my friend Stan Gill actually left Los Angeles for NOLA and has a great blog for you to read. In 2012 New Orleans had more than 9 million visitors and nearly 25% of them were there for business either conventions or general business.

The monkey business you can figure out on your own. If you want to eat too much, drink too much and dance all night New Orleans just might be paradise. The food is some of the best in the country, the drinks are plentiful and the music, well the music is pervasive and sublime. Finding a good restaurant is as simple as tossing a rock. If you’re traveling to New Orleans as a woman alone what could you possibly do?

If, like me, you’re from LA or New York (and a good many visitors to New Orleans are) there’s a good chance that you’ll be startled when everyone calls you “Baby”. It doesn’t come out like a squicky baby but a soft French tone like bebe. Take off your feminist hat and acknowledge you’re being spoken to. This threw me for a loop but after a bit I came to enjoy it. Getting called Baby in New Orleans is now music to this Angelino’s ears.

If you’re traveling solo in New Orleans there’s no reason to hide in your hotel room but if you want to start your trip off right you’d be wise to drop into the Carousel Bar at the Hotel Monteleone (addresses, phones and URLs will be included at the bottom of the post for all bolded locations). There’s an actual revolving carousel right smack in the middle of the bar. Grab a seat at the bar and you’ll slowly get a view of the room.

I happened to have been staying at the Hotel Monteleone and my two drinks at the Carousel bar were free. Why? You ask. Because upon my check in I handed the front desk clerk $20 and requested a room in a high floor away from an elevator and said the magic words, “I appreciate anything you can do for me.” As is often the case it was the best $20 investment of the trip.

Once you’ve had some sips at the Carousel Bar you’ll want to stroll down Royal Street and window shop (or just shop) in some of the galleries and antique shops. I was absolutely smitten when I happened upon the Bevolo workshop where they make gas and electric lights. The craftsmen there were making the same lamps that have graced the French Quarter for 65 years. By Los Angeles standards this is a very old business but I was about to find out that by New Orleans standards this is still relatively new.

If there was one piece that I would want to bring to my home from New Orleans an outdoor gas lamp would surely be it.

Also an Royal Street is James H Cohen & Sons where they sell antique weapons and coins. You don’t have to be a gun nut to want to see dueling sets and weapons from the Civil War. Ladies, just be careful and stay on the left side of the store, the right side of the store is filled with old and sometimes ancient coins that have been made into jewelry. I don’t even like jewelry that much and I was tempted.

My favorite gallery was AFA. At the moment they have an artist there named Nicoletta Ceccoli whose work is simply breathtaking. I’m not sure that I won’t be calling to have something shipped to me. Everything on their walls was incredible.

Royal street is lined with artists and galleries. Do yourself a favor and stroll up one side and down the other. You’ll also want to keep an eye peeled for Touchdown Jesus at the St. Louis Cathedral.

Wandering off of Royal Street I found myself at Hove Parfumeur which is the South’s Oldest parfumerie. I am a huge fan of solid perfumes because they travel well and the scents are both easy to layer and not overwhelming. I picked up three at Hove. If you loved Jo Malone before it was bought by Estee Lauder Hove is a must visit destination.

There are museums all over the French Quarter and they’re tucked away in the most surprising places. The New Orleans Pharmacy Museum sits on the site of the apothecary of America’s first licensed pharmacist. It’s a relatively quick visit and at just $5 for an adult I’d recommend it. Around the corner at Arnaud’s Restaurant there’s a Mardi Gras Museum. Like much of New Orleans it’s said to be haunted. I’d recommend popping into Arnaud’s for dinner ahead of time and just quit whatever diet it is that you’re on because the duck bread they bring out before the meal is worth every hour you’ll need at the gym to work it off. There’s a World War II Museum that I didn’t get to but I’m told is fabulous and since it’s right over on Magazine Street there’s plenty of shopping and dining nearby.

Speaking of dining I had a few not to be missed meals in New Orleans. As a solo female traveler I found these spots to be welcoming. Acme Oyster House or Deanie’s is a great spot for crawfish boil. At Deanie’s they give you boiled red potatoes when you’re seated instead of bread for the table and the spices are perfection. I was late for the crawfish season so they were small and I’m sure the locals frown upon eating such substandard mud puppies but I couldn’t help myself. I love them. Coop’s Place was my favorite food in the city and also the least expensive. It’s like walking into Cheers only in the South.

I’d always heard people talk about praline pie and I’d (wrongly) assumed that pralines are synonymous with pecans. They are not. Pralines are a kind of candy that we learned to make over at the New Orleans School of Cooking but I’m here to tell you that not all pralines are created equal. Head over to Aunt Sally’s for some of the best pralines in New Orleans. I like them creamy.

So long as you’ve had your crawfish, your gumbo, your jumbalaya and your pralines you might as well sit a spell and have beignets and coffee at the Cafe Du Monde. I don’t love donuts and I’m pretty sure I won’t have another for twenty more years but there’s something special about parking yourself right there at the French Market and having a plate full of gluten and sugar washed down with a cup of good chicory coffee. If you sit long enough (like more that 20 minutes) there’s a good chance that there will be a parade going right past you.

New Orleans is a town that knows how to have fun. The days are filled with Second Lines. A Second Line is the parade that happens after the parade, you know the folks who hop in after the fact and dance and march along. Second Lines often feature brass bands and always made me smile. I don’t know how much I’d enjoy it if I had somewhere to be but the pace is definitely slower in NOLA. In fact I had a very difficult time slowing down my gait.

I took one morning off and decided that a plantation tour is the way to go. I really don’t know much about history so tours like these are a lot of fun for me. I feel like I’m constantly learning. The tour I tried picked me up at my hotel at 8.30 in the morning and we visited two plantations. First was the Laura Plantation and the tour was spectacular. We had a very serious tour guide who gave us a 90 minute history lesson that was fantastic and I highly recommend. Next we were shuttled to the Oak Alley Plantation which is much more grand than Laura but the tourguides were dressed in period costume and didn’t seem to know a whole bunch. It was overcrowded and disappointing after Laura BUT the grounds are extraordinary and walking them was a joy. Plus there were some vintage Model T’s at Oak Valley that I really enjoyed. If you don’t want to drive Cajun Encounters was very convenient and priced fairly.

There are things that should be done in very city. Outlet shopping and gambling. There’s a Harrah’s Casino over on Canal Street and I popped over there to play a little blackjack then I headed over to the shops at the Riverwalk where there’s a brand new outlet mall. They have a Neiman Marcus Last Call as well as a Cafe Du Monde in the food court. The food court is made of walls of glass that looks over the Mississippi River. While you’re there be sure to pop into the NOLA Tropical Winery for free samples and Wine Smoothies. Yes, really. Bourbon Street doesn’t hold much appeal for me at night but in the afternoon it’s good for a giggle. Meet my new friend. 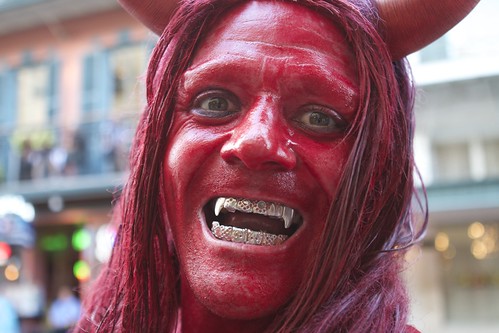 Street Performers getting ready ask that you Stan Hur

Cars at the Oak Alley Plantation

Slave Quarters at the Laura Planatation