This winter we decided to warm up in Rarotonga. Rarotonga is one of the Cook Islands which are basically a tiny dot in the South Pacific. After last year’s trip to Costa Rica, I thought we’d try a new experience at less than half the price. Don’t let that google-automated price tag freak you out. The Cook Islands isn’t a frugal holiday, but it’s nowhere near the cost of Hawaii or Costa Rica with similar accommodations unless you’re looking for a five-star resort. There are no five-star resorts in all of the Cook Islands, there are plenty of four stars, and it will be more than enough, three would probably be fine, you’re traveling to paradise. Though, the price isn’t the thing, we were looking for a new experience, and the Cook Islands had my family swooning.

When I researched the trip, I didn’t find a lot of information. There’s some stuff to do, but most of it is snorkeling, which hotel to stay at and a few island tours. There’s a market (resembles an American Farmer’s market) each Saturday morning where almost everyone on the Island gathers but other than that you won’t find much information about visiting the Cook Islands. I will attempt to share with you everything I know about the Cook Islands.

Getting to the Cook Islands from LAX

Currently, there is one direct flight from LAX to Rarotonga each Sunday night and one return each Saturday. Both flights are on Air New Zealand. You’ll leave LAX just before 11 pm, have a little dinner on the plane, go to sleep for the night and arrive in Rarotonga at 7 am. The flight is close to 10 hours but the time difference is just two hours, so you don’t have to worry about jet lag. It’s a surprisingly easy trip as all the hotels know that American travelers will be arriving at dawn, so they have special rates where a room is available to you at 8 am. The airport is the size of a Texas living room; it’s easy to grab your luggage and go.

Travel from Rarotonga to LAX

This is a midnight flight, and it’s also straightforward. You’ll get on the plane, have your dinner, fall asleep and wake up in Los Angeles for an 11.30am arrival. Again, the time change is minimal, and I’d be stunned if anyone had any sort of jet lag. As with the trip from LAX to Rarotonga, the planes are smaller and older so the business class is affordable but doesn’t include the lay flat seats that make trips truly luxe (and more expensive). We flew coach there and business on the return. I often do that with trips where I’m unsure if it’s worth the expense. If you’re a good traveler, this is a fine flight to save your money and your miles and to go coach but if you’re tall or wide the seats are small, even in business. Know that before you book.

Accommodations: We stayed at the Pacific Resort. My family of four opted for a two room villa and I cannot overstate how lovely this was. We enjoyed our evenings playing cards or board games and having a little living room and a lanai made family time fun. We were also there for Christmas and Boxing Day where the entire island was all but shuttered. On those nights we cooked a little pasta and salad and enjoyed a relaxed family dinner. Having a serviceable kitchen made that happen.

My parents stayed in an oceanfront room. Oceanfront rooms are great options for couples and honeymooners. I’m guessing the sunrises were spectacular, and if you’re in your guest room during the day it would be lovely to look out onto the ocean, but when it’s windy, the beachfront rooms are not protected. We were there in December, just before the rainy season. If you’re an off-season traveler I’d recommend the garden view otherwise you can go either way with it. There are advantages to both types of rooms. The whole island is only 26 square miles, and you’re already staying at a beachfront resort. You’ll get plenty of beach time – trust me, the garden view is more than enough, and in some cases preferable.

The resort has a pool. It is neither heated nor well maintained. It didn’t matter at all to us, but that might matter to you. Also don’t be so relaxed that you don’t use your hotel safe. We had an iPhone stolen, it may have been at the resort, and it may have been with one of the tour companies, either way, we were too relaxed.

Cook Island Activities: Bring a snorkel mask and fins and maybe some water shoes. The water is warm and clear, and the snorkeling is magnificent even on a bad day. From our hotel there were two nearby islands, one you could walk to and the water never went above my chest and another that you can swim to. My son and I spent a ton of time in the water each day as he loved the idea of being able to walk to an island. In this ridiculously shallow water I’d sort of float along, and as we approached schools of fish, I’d tap Alexander and make him put on a mask and look down. If your local ocean is cold (like mine) it’s an absolute treat to swim with clownfish, thousands of mackerel and the ubiquitous Picasso triggerfish which will likely attack you at some point. It doesn’t hurt, but it’s a good reminder that the ocean doesn’t belong to us. It’s also quite likely that a dog will swim alongside you at some point or hang out with you on the beach. They might even follow you back to your hotel room. It’s all part of the island vibe, roll with it.

Your kids will recognize the fish in the lagoon from Finding Nemo. As you swim along, you’ll hear Ellen Degeneres’ voice in your head. Okay, maybe that’s just me but I really did feel like Ellen, and I were swimming together.

I didn’t see any lifeguards on any of the beaches, so you’ll need to supervise your children accordingly and snorkel in pairs.

There are Jeep tours around the islands. We did one of them, and it was expensive, NZD 150 a person and in all candor, it wasn’t money well spent. There must be better ways to see the island. I know that there were off road tours available but to drive you needed a license as they used paved roads as well, we opted against that, but in retrospect, that or a bicycle tour might have been a better plan. The minute you get off the airplane there will be a deluge of fliers for local companies. You needn’t plan this much unless you have a birthday or anniversary that you want to celebrate in a specific manner. I’d plan days one and two and then add activities as you see fit.

Do not visit Rarotonga without visiting Pa. Pa has a good website that will detail the treks for you. Since my parents were with us, we opted for the nature walk rather than a cross-island trek. Pa introduced us to his Buddhist philosophies, taught us about numerous plants and fed us a delightful lunch. Here are some highlights from the walk with Pa.

What gave me fits and giggles were when we were chatting with Pa about his children and where they lived. His daughter married an American and mentioned that he was a television reporter. He then told us that his son in law’s father was a Four Star General and I might have screamed something like, “Oh my god you’re related to Wesley Clark????” The vision of these two men next to each other on a family tree was all too much for me.

Food in the Cook Islands: The diet of the Cook Islands is influenced by New Zealand, which is in turn influenced by England. There are a lot of stands with fish and chips along the side of the road. Though delicious, this will do you no favors in your bikini. Be sure to eat lots of fruit. The fruit in the Cook Islands has a flavor unlike anything you’ve tried in the US. Our favorite dinners came from the night market. Families set up stalls and sell curries and teriyaki. There were salads and barbecues that were full of flavor. People were very sensitive to allergies, and when we had questions about ingredients they went out of their way to accommodate.

Rarotonga has one speed: laid back. No one is in a hurry, stores aren’t open particularly late and though service is always friendly and most often effective it is not fast. You’ll want to bring a stack of books, some sunscreen, some mosquito repellant and your favorite swimsuit. It’s a religious country, so outside of resorts and restaurants, you won’t be able to get alcohol on a Sunday or a Church Holiday. If you’re renting a house stock up on neccesities Saturday.

Souvenirs from the Cook Islands: Like their Tahitian neighbors the Cook Islands are known for their black pearls. Some have suggested buying pearls only at the Saturday market where pricing ranges from $8 to $800, and many locals recommended using only jewelers in town. I became quickly overwhelmed and picked up a pair of mother of pearl earrings for $15. Jane got a pareo and Alexander got some sort of hatchet. Unquestionably the best souvenir we got was a Cook Islands Drivers License. To rent a car or motorcycle one needs a license (we rented neither), but for $20NZ and 5 minutes of your day you can walk into the police station (which has only two jail cells, one for each gender & typically empty) and get a license. There’s a bus that circles the island. One goes clockwise and the other counterclockwise. You’ll never wait more than about 20 minutes, and there’s no reason to hurry. You might get a singing bus driver, and ten trips are $30NZD. We never had a time where we wanted to take a taxi or rent bikes, but many people did. We found the bus to be more than adequate. 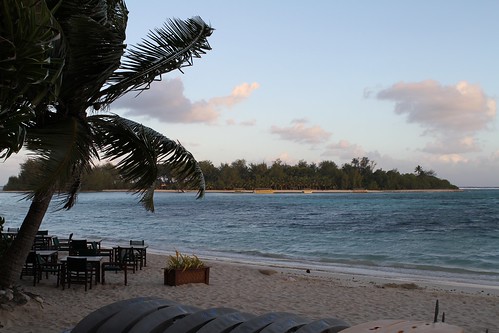 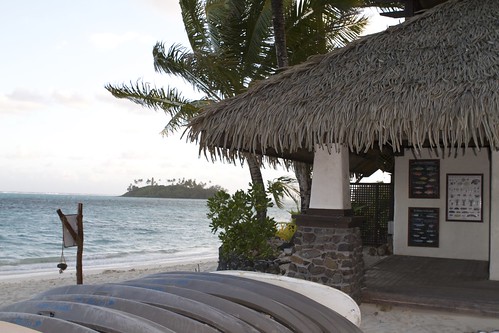 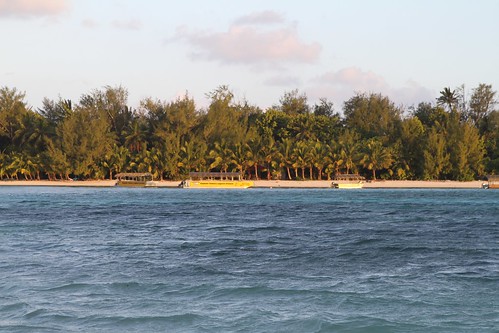 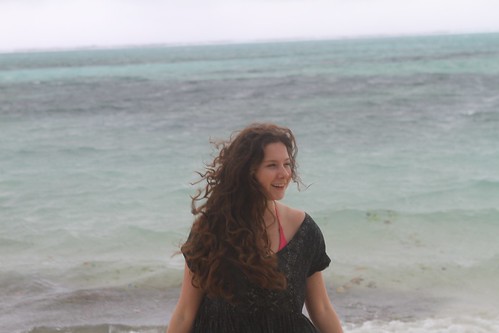 And a couple of gratuitous aren’t the kids cute photos. Because ya know… I’m me. 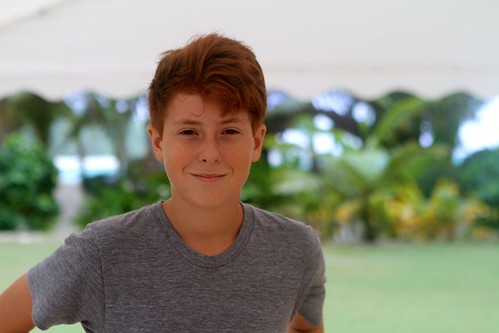 Here are some hotel options for Aitutaki

3 thoughts on “A Family Week in Rarotonga, Cook Islands”