I talk to my kids about rape and rape culture. I have a son and a daughter and they both need to hear the same words and as they’ve grown older the discussion has evolved. Here is a sampling of things I’ve told my children from the moment they learned to speak written in order of age:

You don’t have to be polite to strangers.

No one can get you in trouble with Mom and Dad, not even [fill in the blank with every authority figure on earth].

You don’t have to let anyone touch you.

You don’t have to hug anyone you don’t want to hug. Even me.

You can only touch people when they want you to touch them.

You don’t have to kiss anyone.

If someone doesn’t want to kiss you back don’t kiss them.

Sex must always be consensual. If someone is unsure, either someone, leave it for another day. Walk away.

When you go to parties don’t drink from any open containers. If you don’t crack open the bottle or can yourself don’t drink it.

Don’t put your drink down. If you do, get yourself a new drink.

Stay away from the stun gun (true story…)

See that last one? That’s going to keep my son out of hot water so we repeat it. A lot. But I understand parents having a fear that their sons will be falsely accused of rape. In fact it’s such a concern for some dads that they talk about it on #DadChat a lot. Not to get all logical or anything but I think it’s worth noting that men are raped too.

The discussion didn’t end in 2014, last night Bruce Sallan tossed this golden nugget out there. 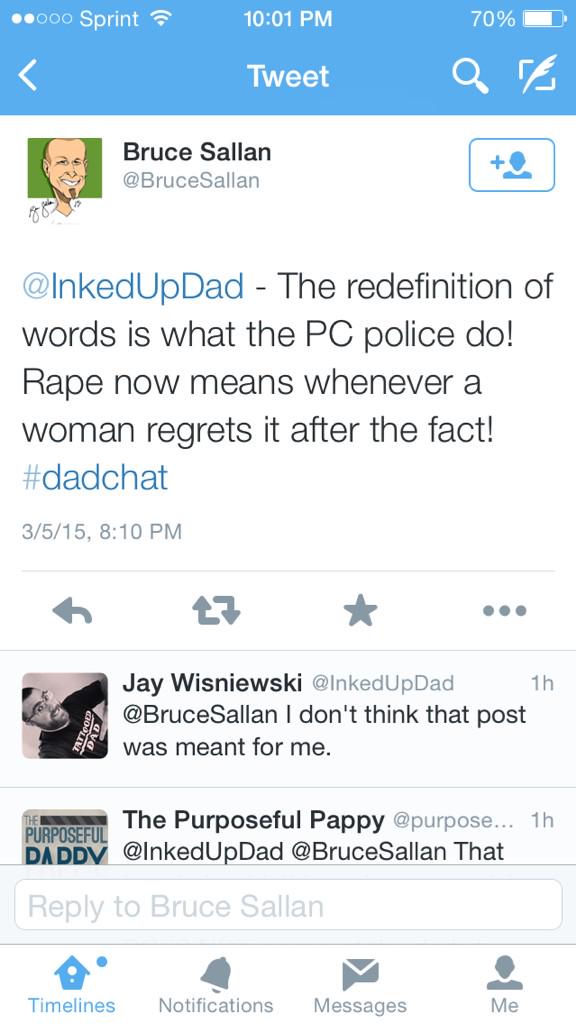 The internet went wild. It’s entirely possible that some of the mom bloggers really didn’t like Bruce much because even when he’s busy trying to get sponsors for #DadChat (good luck with that one now) he’s busy taking swipes at mom bloggers, diminishing their influence and trotting out some sketchy numbers.

Dads are important at home and online. Dad bloggers put out some pretty great content and it’s a nice Yang to the mom blogger’s Yin.

I would like to say that this was one unfortunate tweet and that it isn’t part of a pattern but I can’t do that. In 2013 Bruce writes:

We’ve been living through a very feminized time in human history. Women dominate our elementary schools and all our schools seem to favor girls/women in their curriculum and in so many other politically correct ways. Boys are failing at higher numbers than ever and more and more women are accepted to colleges while their male counterparts are often floundering. Plus, the work place is now fraught with HR rules. Men can literally be brought up on sexual harassment charges simply by the perception of a female co-worker saying something he did or even how he peered at a female co-worker was sexual harassment.

Heck, I’d be scared to work in any large environment today. Towards the end of my showbiz career, post Anita Hill, I stopped hiring female secretaries simply because I didn’t want to be walking on eggshells. [emphasis mine]

After last night’s twitter debacle Sallen posted an apology of sorts. Version two no longer includes something nasty about another blogger but it does include this:

I was called names I wouldn’t call my worst enemy. My sons found out. My wife found out. I request that you consider the sum of my life, my immediate apologies at the moment however inelegant they may have been, and this more considered one now. Let me again make my position explicitly clear: RAPE is a horrible crime and its victims must be protected and supported.

Please do not confuse political correctness with whatever it is that’s going on over here. Not hiring women because you’re afraid that they’ll send you to HR jail? Somehow by asking WTF on twitter Sallan’s wife and child are involved? You know what? If that’s what his family is being told at the dinner table it’s probably pretty important that the rest of the world chimes in and offers a different less felonious point of view.

To be clear. This is what an “immediate apology” looks like:

These are great dads:

Um. No. No it doesn’t. Not by a long shot, Bruce “@BruceSallan … Rape now means whenever a woman regrets it after the fact! #dadchat”

Last night’s #DadChat was a train wreck. I have never seen such a disgusting display. That man does not speak for dads. — Mr. Awesome SaHD (@mrawesomesahd) March 6, 2015

@KGrayDonald @dizzycatdesign You should see the anger brewing behind the scenes. Dads don’t stand for crap like this, obviously. #dadchat

@KGrayDonald @dizzycatdesign You should see the anger brewing behind the scenes. Dads don’t stand for crap like this, obviously. #dadchat — Whit Honea (@whithonea) March 6, 2015

@BruceSallan I don’t think that post was meant for me.

During the #DadChat tonight I was tagged in an unsolicited statement regarding rape. Please understand those words and beliefs are not mine. — Jay Wisniewski (@InkedUpDad) March 6, 2015

We do a pretty good job of talking to our daughters about what rape is. We teach them to stay safe (whatever that means…) but we really need to talk to our sons about consent and erring on the side of caution. We teach kids to wait 24 hours before sending an email they may regret, how about teaching them to wait a day to have sex? I promise, everyone who was genuinely interested will still be interested.

Updated to add a few more gems because it’s important to note that this isn’t a “one off”:

Diversity is one of those words, like multiculturalism, that I truly dislike because they are so often used in politically correct and foolish ways. For me, it’s like saying, “gender” instead of “sex,” when referring to a man or a woman. What was wrong with just saying “sex?” But, like all things PC, the politically correct segment of our society has horribly corrupted words. Rape now means any sex that a woman regrets afterward INSTEAD of the violent crime that it really is.

…the politically correct police have sheared so many words of their meaning. Rape is a heinous crime, but in many circles it is applied when a woman regrets having sex after the fact, such as in a college environment when a young woman gets drunk and/or high and finds herself the next morning in bed with a young man she regrets having slept with.

Be CLEAR that I am not advocating that real rape – when a woman is involuntarily attacked or doped and sexually assaulted – isn’t a heinous crime. But, regret “after the fact” is not rape.

27 thoughts on “#DadChat and Rape Culture”