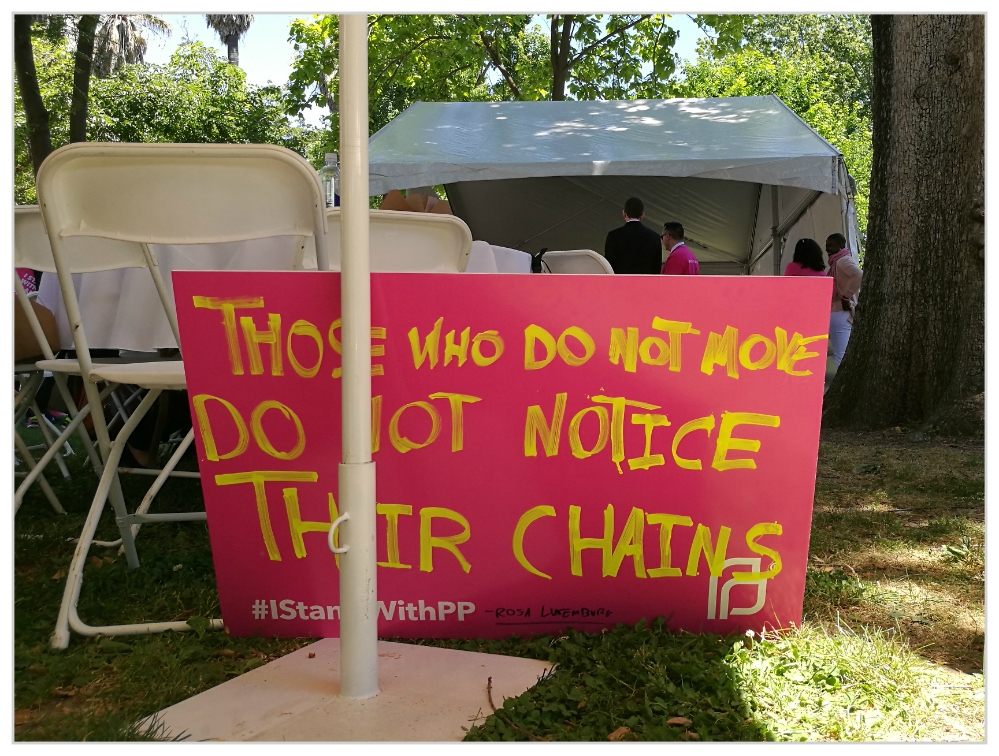 I’m not a lobbyist. I’m not even a very good Democrat. I voted for Obama begrudgingly the first time and a little more happily the second. I spent my 20’s and my 30’s identifying as pro-life while giving money and support to Planned Parenthood, because even as I didn’t have need for it to tend to my own body I have always felt that Planned Parenthood plays a critical role in public health.

I currently have low level irritation with the local democrats and I struggle to remind myself that whomever it is that does the most work makes the most mistakes. We don’t have a local GOP to worry about in any meaningful way, just a few folks like Fran Piazza on the Reseda Neighborhood Council. It’s enough to remind me why I changed parties. I’m not even sure why that’s worth mentioning except to offer some background as to why I struggle with each of the parties.

In any event Emmie Johnson invited me to join her at the capitol for lobby day. I’d heard about events like these and wondered who these women were that jumped on to busses at 2am to meet with their state assembly and senators. I still don’t know much about them because Emmie got us a flight and a hotel room. She also had us in meetings at promptly 9am so that bus with it’s 11am arrival wouldn’t have been terribly practical.

So late in the afternoon on Mother’s Day I left my family and headed to the capitol. I had dinner with my friends, their kids, and their two week old granddaughter. If I couldn’t have dinner with my kids and my mother on Mother’s Day I figured sharing someone’s first Mother’s Day would be a close second. It wasn’t. It was the best ever. I got my hands on that baby girl and I inhaled her sweetness like it was oxygen to sustain me, and in many ways that baby scent is and will always be.

I was touched and honored that my friends let me share a special dinner with them.

I was also invigorated and propelled forward because when you hold a newborn baby girl with perfect ears, pursed and ready to nurse lips, curled fingers, and skin that barely shows a pore you cannot feel anything but obligated to her.

You cannot look at her and ask her to grow up and then fight for her own rights to healthcare. You hold her, you rock her, and when you hand her back to her parents who are working their asses off to keep it together with no sleep and a mystery human with a lot of needs and no language you get busy trying to figure out how to pave a path for this perfect little person to walk down.

The path we pave for everyone’s daughters begins with healthcare and education.

The most recent laws to defund Planned Parenthood are likely illegal (unconstitutional) and the details are probably best laid out by someone other than myself so instead I’ll talk about what happened on on lobby day. Approximately 900 women boarded busses from all over the state and made their way to Sacramento. The afternoon was filled with meetings with Senators and Assembly People many of which were instead attended by staffers as sessions ran overtime. We came to the meetings with staffers, volunteers, and constituents and explained to them why Planned Parenthood was critical to California. Women and men shared personal stories. Republican women with their daughters, devout Mormons, and women who remember when abortions were illegal and their friends died or disappeared.

Mostly though we talked to the lawmakers about the need for physicians to be paid. We talked to them about the fact that doctors can no longer afford to accept Medi-Cal or they operate at a loss. We asked our lawmakers to sign a paper pledging to take .5% of the budget from the $1 billion that prop 56 adds to the budget and to allocate that money to an increase in Medi-Cal payments to providers.

Neither of the deputies I met with were willing to commit to anything, and that’s understandable but my hope is that their bosses will do the right thing.

Throughout the day I kept looking at Erin and Emmie and saying, “Do you think this works?” And in every hallway there was a sea of pink shirts. They assured me it would have impact, other people told us about their meetings and how GOP hardliners turned into listeners when their constituents told them about the medical services they received from Planned Parenthood in vulnerable moments. Over and over again we heard about medical services dispatched without judgement. When we debate whether women are entitled to STD screenings, emergency contraception, and other services we are told we should pay for it ourselves. As discussions devolve the words go from sinner to whore, from whore to slut… and let’s please keep in mind that the majority of abortions in America are performed on women who already have children. It’s not like we don’t know what another child will do to our lives.

@FreedomRecon @MeRealIvoryhead I’ll give abortion a free pass due to rape/incest or health problems, but abortion as birth control = whore’s who should close their legs.

Stop using rape as your only excuse against using abortion as birth control! RAPE AND MEDICAL ARE NOT THE SAME AS YOU BEING A DIRTY SLUT!

@CecileRichards Nothing says I’m selfish and heartless more by spreading your legs and allowing a butcher to cut your baby apart! #DefundPP #abortionban

Since when couldn’t women (outside of rape victims) control their bodies? Close your legs and stop being sluts.#prolife pic.twitter.com/Fc8kL3TT1d

Further, if you don’t want an abortion it’s really okay, just don’t have one. Don’t be like a gluten free vegan, find another discussion to have. This one’s a snore.

I still don’t know what a lobbyist really does. I know that I can do a 10 minute meeting. I know that I need to show up more. I also know that I’m not enchanted with politics or politicians. With that being said, among the many speeches we heard throughout the day one stood out.

“Let me be very clear here: If you believe in a woman’s right to control her own healthcare, if you believe that healthcare is a human right and not a privilege for those who just can afford it and if you believe that women are entitled to full and unconditional equality before the law, California, our state, will always be your sanctuary,”
Senate leader pro tem Kevin de Léon

I feel good about California. I am optimistic about Planned Parenthood. I would have liked to have seen more African American women represented Monday. We have a lot of fights ahead of us in 2017, so I’m going to look past the imperfections of the day and focus on the strides we’re making.

We’ve learned a terrible lesson and this isn’t the time for complacency.