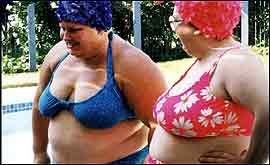 I can’t carry my 7 year old on my back all day long and still have a good quality day. He’s 50 pounds or so. Many of you “fat acceptance” bloggers have lots more than 50 pounds on you. Stop pretending it’s okay. You are dying and some of you are killing your kids. That has me irate.

It’s got to suck to be morbidly obese. I can’t imagine laboring to get out of bed, oh, wait I can, you see I was HUGE when I was pregnant. It’s not a way to live your life.

Here’s the deal, you stop pretending that 9 year olds with man boobs are in a “phase” and I’ll do everything I can to support you in your new, life affirming lifestyle.

Because fat acceptance is kinda like cancer acceptance. You’re killing yourself and you sound like an asshole when you talk about it.

128 thoughts on “Fat Acceptance is Bullshit”