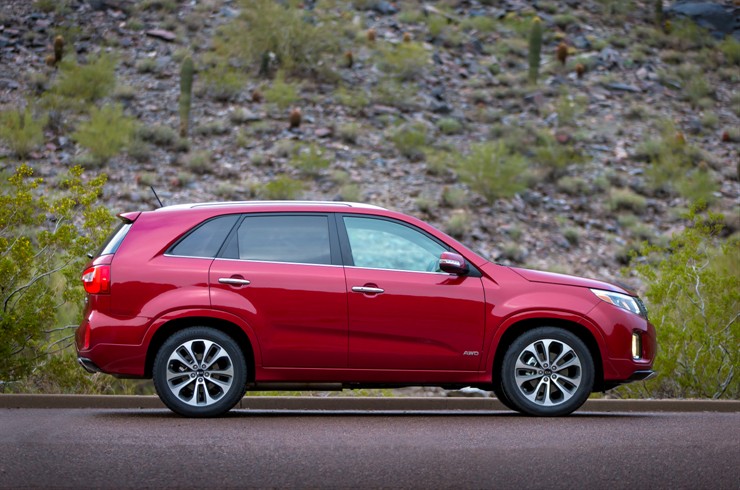 When the 2014 Kia Sorento showed up in driveway last week I thought, “Let me get my diaper bag and stroller.” Because this is clearly not the part of my life that requires 7 seats and a hatchback.

And then Jane had five friends over who wanted to go the High School football game and I felt like a genius for having just the right vehicle to cram a couple of 6 foot tall teenage boys into the back seat.

I felt safe and secure in the Sorento but the NHTSA star ratings aren’t in yet on the 2014 model. The 2013 Sorento is all four and five stars so I think it’s reasonable to expect that the 2014 will be at least as safe as the 2013.

Let’s talk about what it’s like to drive a Kia. As I’ve mentioned before Kia has a terrific navigation and bluetooth system. When Christina and I are waiting at the bus stop for our kids she’ll often hop into the cars I’m driving and we’ll lament the sad state of affairs on our luxury vehicles. Why is it that a $35,000 SUV is so superior to a Mercedes or a BMW navigation system? I was going to add Jaguar but I figured y’all would just laugh and be all, “Jaguar and technology bwah hahahahaha.”

The Sorento is not a quiet vehicle and you can hear the road, particularly if it’s rough. The Sorrento is also not a noisy one. It’s sort of in the middle with everything. You can feel the road enough to enjoy the ride but it’s not a bouncy four wheel drive truck experience nor is it the floating down the road sensation you get on some of GM’s larger trucks.

Kia is doing it’s own thing and that’s a good thing. Much like some of the other vehicles in the Kia lineup the Sorento appears to be designed around the actual needs of the driver. Does an SUV need to be high off the ground? Yes. How high? Not so high that you can’t get in an out in a skirt. Heated seats? Yessir, they have cooled seats too. Do you want to stream Pandora? Easy as pie with the Kia. All wheel drive? Of course.

One of things I couldn’t figure out until midway through the week was where the trunk release was located. Look up ladies and gents because there it is. When you’re dropping off the carpool kids they never close the trunk (they also don’t turn off lights and I’m unsure if that’s related) so one touch closes the trunk, just look up to the sunroof controls and you’ll see the button there. If there’s no sunroof look up anyhow.

I love third rows of seats but I hate it when they’re complicated to use. Apparently Kia wants me to be happy because the third row folds flat and doesn’t require an engineering degree to make it work. The second row seats also adjust and recline in case you’re taking a long road trip or if you need to adjust them to make a car seat fit more safely.

There’s no luxury missing from the Sorento. The MPG (19 to 24 with an average of 21) is good considering the curb weight and it’s a very attractive vehicle. I drove an AWD LX with a premium touring package that priced out at $35,750. If you can swing it I absolutely recommend the premium package because the zone heating and cooling made the kids really comfortable and I dislike having them scream at me that the car is too stuffy (my kids don’t actually scream but it sure feels like they do).

I need to note that although I was in a 4 cylinder small SUV with a paltry 191 hp I spent the week assuming it was a 6 cylinder. It’s somehow quite peppy and I like getting on the freeway at a decent speed.

If getting more than you paid for is attractive to you then the Kia Sorento is drop dead sexy.