Three days ago it was announced that a local baseball coach has measles. There are at least 70 confirmed measles cases currently in California and it has spread to other states. Measles had been eradicated in the United States 15 years ago but the anti vaccine movement has brought it back. Maybe next they can bring back Polio. Everything old is new again, right?

Facebook is full of people who, “Had measles and chicken pox as a child and are just fine.” To be fair not a lot of people die from measles only 41 of them died in the Philippines between January 1 and May 23. So I guess if we bring measles back to the US and adjust for our population we can expect 150 Americans to die from measles in a 142 day period. That’s only a little more than one person a day. No big deal. We’ve got like 316,000,000 people living here. The only bummer is that if we follow the Phillipines model we’d have somewhere over 117,000 people sick for several weeks during that 142 day period.

I have a friend Annie who started an interesting discussion on her Facebook page. 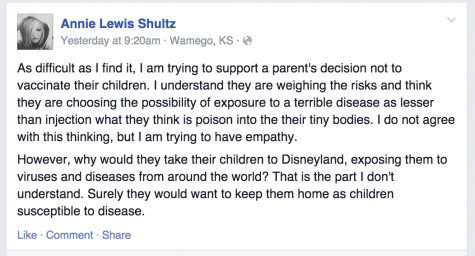 Although I know Annie was trying to be nice we don’t do our damnedest to be empathetic to the mothers who hand their children boxcutters and send them to school. We skip empathy and move right on to outrage because part of being a good citizen is caring for the health of the people around you and not endangering them.

Some of the reactions to Annie’s post were encouraging:

Only to be followed by this:

We don’t vaccinate and I take my kids everywhere. Now I wouldn’t as newborns, but now that they are old enough and I know they are healthy and have strong immune systems I don’t worry. Those diseases are really only dangerous when ones immune system is weak. They’ve both had chicken pox and measles and [redacted] has had fifths. It wasn’t a big deal for either of them.
Now, if my kids are sick, even a sniffle, I keep them home and away from other people so as not to spread germs. If more people did that, we’d have a lot less to worry about!!

I was vaccinated as a kid and still got everything… Only much worse than little kids do because I was a teenager. So ridiculous. My brother was also vaccinated and when I got chicken pox as a teen, he got a mild case. He later got shingles. All of this was due to not having had a full case of chicken pox. Had he, his body would have built the immunities needed.

Except that one glance at the CDC‘s website will tell you that this mom has it all wrong:

After you get chickenpox, the virus remains inactive (becomes dormant) in certain nerves in the body. Shingles occurs after the virus becomes active again in these nerves after many years.

The reason the virus suddenly becomes active again is not clear. Often only one attack occurs.

Shingles can develop in any age group. You are more likely to develop the condition if:

You are older than 60
You had chickenpox before age 1
Your immune system is weakened by medications or disease
If an adult or child has direct contact with the shingles rash and did not have chickenpox as a child or the chickenpox vaccine, they can develop chickenpox, not shingles.

Of note: There is a Shingles vaccine available. Unfortunately it is a live vaccine so most immunocompromised adults cannot get it.

I guess the mom who doesn’t vaccinate her kids because she knows everything there is to know about Chickenpox and shingles isn’t actually a clinician.

Just as I was about to scream at the computer, “Don’t listen to Annie’s friends, they’re making things up!” Someone chimed in with:

Yes, I followed what the pediatrician recommended. I’m an accountant, not a doctor, so I listen to those trained in the profession. We have always skipped the flu vaccine, though.

The flu shot? Ladies, the flu kills somewhere between 23,000 and 36,000 Americans a year. No, it’s not a perfect shot, some years are better than others but you put your kids in bike helmets don’t you? The flu shot isn’t the hill I’m prepared to die on but it seems a little silly to skip it.

Reason. Someone injected reason. I love this Mom.

I have tried to be open minded but I’m struggling more and more. These parents are breaking our herd immunity and are responsible for these diseases back.

And then there was some discussion about not taking infants to Disneyland because they can’t remember it anyhow but that’s not really the point. Infants are taken to grocery stores and elementary schools, they’re taken to parks and offices. Infants are part of the world much like the elderly and infirm. They leave the house, they catch things.

we read a lot of research when we were making the decision for [redacted], and the fact is, the information out there is extremely confusing. There’s some research on the non-vax side that is of concern (not autism…other stuff), and there’s honestly no good research on the vax side that they are safe and effective.

What possible research could this woman have done? I was going to make a list of resources demonstrating that vaccines work but then I remembered that anyone who took this seriously wouldn’t read them anyhow. This person is the reason that we need better science eduction in our schools. It is impossible to have any level of scientific literacy and to state that there is no good research to show vaccines are safe.

I want to hug this mom.

As the parent of a child with autism, who also has older not diagnosed autistic family members, I am so sick of the mumbo jumbo pseudo medicine crap I hear on a daily basis.

Now we’re back to dangerous declarations:

Annie, to address your polio question, 95% of polio cases were asymptomatic. Of the 5% who had symptoms, most were no worse than a mild cold, and a fraction of those were paralytic cases. They were able to link incidences of paralytic cases to diet, as it would often hit an entire household, and other times entire villages avoided even a single case of paralytic polio by modifying their diets during the polio season. Polio was also on the decline before the introduction of the vaccine, and the last cases of Polio recorded (here in Canada) were due to the live oral vaccine they use to use. They had to stop using it because it was spreading Polio, and the dead DTaP does not provide adequate protection against Polio if it were to come back, so they have the live vaccine on back-up to bring back if Polio were to resurface.

There is a book called Just a Little Prick, and goes into great detail about all of the diseases on the childhood schedule. I research the diseases and make the choice about “am I scared of this disease and how will I handle it if we got it?” the deciding factor on vaccinating or not. Our vaccine schedule is different up here in Canada too, the US has way more on theirs than we do. And we have way more on ours in Canada than Europe does. So all sorts of tourists are visiting the US who are not-vaccinated, as well as a large amount of the adult population in the US who did not have a fraction of the vaccines they now give kids. So why the hate-on for non-vaxxing parents, when most of us are not vaccinated or immune either? Anyone born between 1970-1996 did not get a second dose of the measles vaccine (routinely) to ensure immunity, so why is that not making headlines? It’s always about the non-vaxxing parents.

Everything about this is insane. Don’t listen. Self publishing a book doesn’t make it true.

According to this mom god is kind of an asshole. I mean lots of kids die every day.

Now let me introduce to you two of my favorite healthcare workers on the web. One is Dr. Terry Simpson and the other is Chloe Jeffreys.

Scientific research is not:

My friend Terry pulls out the big guns, and I must admit to agreeing with him when he reminds us that the anti vaccine movement has killed more people this year than ISIS.

I used to think parents who didn’t vaccinate their children were silly. Then I thought they just weren’t very smart. I knew they weren’t good members of the community but it’s time to stop tiptoeing around them. These parents are making a decision that turns their family into a public health menace. You simply cannot be a good parent and decide to not vaccinate your child.